How Are Cigarettes Packed?

Home » Blog » How Are Cigarettes Packed?

How are cigarettes packed? It mainly consists of 3 steps: 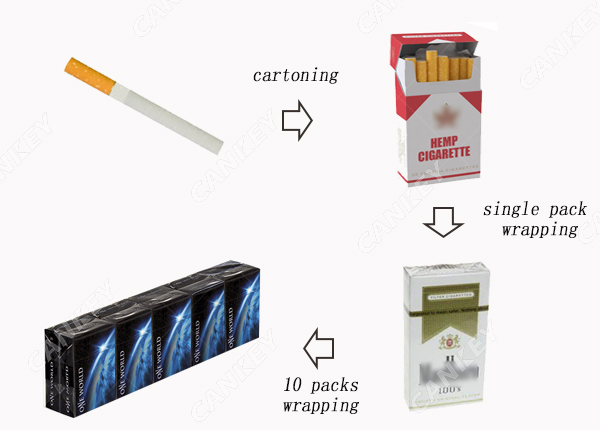 Below we will explain these three steps in detail:

According to the packaging requirements, a certain number of cigarettes are packed into the box, which is mainly completed by the cartoning machine. Using servo motor, touch screen, PLC programmable control system, the man-machine interface display operation is clearer and simpler, and the degree of automation is high. The photoelectric eye automatic detection and tracking system is adopted, which saves packaging materials to the greatest extent. The packaging range is wide, easy to adjust, and can be adjusted at any time according to the number of cigarettes packaged by the customer.

This step is to use BOPP film to wrap a single box, which is completed by a 300A cellophane wrapping machine. The cigarette box is transported to a predetermined position by a conveyor, and then film-wrapped and folded to form a designed packaging style. Fully automated operation process, automatic feeding, stacking, wrapping, heat sealing, sorting and counting. The high production efficiency greatly reduces the labor cost of the enterprise.

This step is to pack 5 or 10 boxes into a group, which is completed by the 400 model. A series of mechanisms such as film stretching, film cutting, folding, wrapping, heat sealing, shaping, and discharging are used to complete the wrapping of packaged items. Using a frequency conversion speed control device, the packaging speed can be changed according to different work requirements. When the size of the box changes, the machine needs to replace the mold and adjust it. The temperature of each sealing heating plate is controlled by PLC, and the heating temperature can be set according to the changes of the external environment and can be automatically maintained within the set temperature range.

After the above three steps, the entire packaging process of cigarettes is completed.